Pardon the radio silence, for i have been a tad busy with cakes the last week. I delivered a Pokemon Pikachu cake to a 8 year old's party over the weekend. This marks my first tiered cake sale. The first being my lil girl's fairy cake. The bottom square tier was a vanilla cake with oreos and cream filling and the top round tier was a chocolate pound cake with vanilla buttercream. 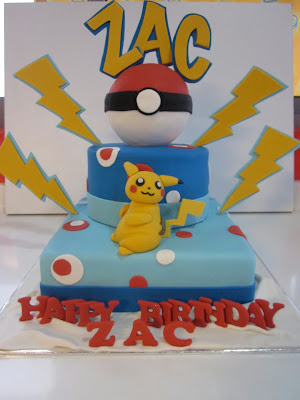 Zac's mom was really cool, she gave me free reign on the design of the cake with just 2 criteria; with Zac's name atop the pokemon ball and the thunderbolts on the side.  The rest is up to me. Well, i figured that since the ball and the bolts should probably be the main focus of the cake, the rest of the design should be plain and simple. Pokemon ball was made of rice krispies. Did i mention how i love rice krispies? its a real life saver for many  cakes, since it sculpts well, is light enough and most of all, yummilicious! 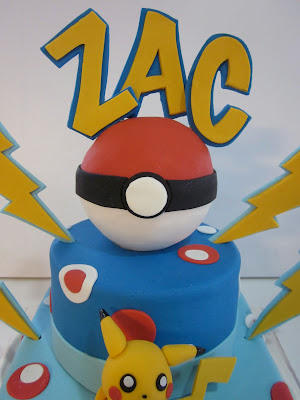 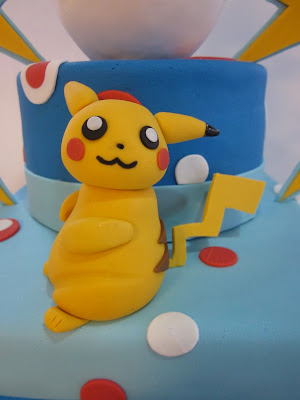 After the party was over, Zac's mom sent me a msg:

" Thanks for making such lovely n most important delicious cake.. Zac ate 3 pieces yesterday n left one last piece for his breakfast today!!"

anyways, i have an order tom, which i have been working on over the last 3 days and its almost done. this was a last minute order, and one of the more challenging ones, but also one of my most satisfied one to date. not only was i constrained by time, but also the figurines were a bit tricky to make. but all was well still : ) peektures tom!

PS: something interesting and exciting is also brewing for me! probably one of the biggest step for my mini cake venture thus far! its still under wraps, but will be revealed soon enough! ; )